Alexandria: City of Memory is written by Michael Haag and is published by Yale University Press, London and New Haven, and by The American University in Cairo Press, Cairo, 2004 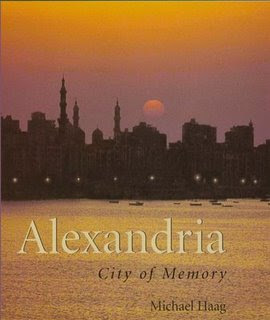 'Michael Haag’s Alexandria is a remarkable achievement. Not merely a composite biography of Forster, Cavafy and Durrell, or their relations with the city, it is also a history of Alexandria, full of fascinating detail.'—Sir Frank Kermode

This book is a literary, social and political portrait of Alexandria at a high point of its history. Drawing on diaries, letters and interviews, Michael Haag recovers the lost life of the city, its cosmopolitan inhabitants and its literary characters.

Located on the coast of Africa yet rich in historical associations with Western civilisation, Alexandria was home to an exotic variety of people whose cosmopolitan families had long been rooted in the commerce and the culture of the entire Mediterranean world.

Alexandria famously excited the imaginations of writers, and this book folds intimate accounts of E. M. Forster, Greek poet Constantine Cavafy and Lawrence Durrell into the story of its inhabitants. It recounts the city’s experience of the two world wars and explores the communities that gave Alexandria its unique flavour: the Greek, the Italian and the Jewish. The book deftly harnesses the sexual and emotional charge of cosmopolitan life in this extraordinary city, and highlights the social and political changes over the decades that finally led to Nasser’s Egypt.

'This is full of intrigue and incident, and sparkles with countless delightful details.'—S.B Kelly, Scotland on Sunday

'A fine and deft interweaving of the personal and the political.'—Michael Glover, The Financial Times

'A brilliant portrait not only of Alexandria, but also of an international city. Ending this haunting book, some readers may want to re-read it at once.'—Philip Mansel, The Guardian

'Haag’s Alexandria goes further than any book I know to animate the world these people lived and loved' — Anthony Sattin, The Sunday Times

Alexandria: City of Memory has also been published in Greek translation by Oceanida Publishing, Athens 2005.

Michael Haag's book Alexandria: City of Memory is a judicious mix of history, biography and literary scholarship with a dash of political thriller thrown in. ... Its aim is to capture the feel of historical Alexandria – city of the Ptolemies, of Callimachus, Theocritus and Cavafy – before two world wars and Arabic nationalism changed it forever. ... For Forster the talismanic Cavafy poem had been The God Abandons Antony; for Durrell it was The City. Both, of course, centre on the loss of a city of the imagination. Now the historical Alexandria, too, exists only in memory. Its fate calls to mind that of other cosmopolitan centres reduced by ethnic nationalism to a shadow of their past glory – Smyrna, Salonica and Constantinople, to name but three. Haag's careful and well-written book is a fine elegy and tribute to Alexandria.