Cult Books: An Obsession with the Obscure

The Alexandria Quartet joins the Voynich manuscript, Naked Lunch, The Magus, Seven Years in Tibet, the Rubaiyat of Omar Khayyam, The Fountainhead, Zen and the Art of Motorcycle Maintenance, the Jerusalem Bible and thirty-two other titles in a choice (and rather American) selection of cult books featured by Abebooks.

Defining a cult book is not easy. Let's start with the more obvious aspects of cult lit. To begin, a cult book should have a passionate following. Buckets of books fall into this category, including classics like J.D. Salinger's The Catcher in the Rye and On the Road by Jack Kerouac. But even mega sellers Harry Potter and 50 Shades of Grey can be considered cult lit by that definition. A cult book should have the ability to alter a reader's life or influence great change, and for the purpose of this list, it should also be a bit odd and a tad obscure.

Many of the titles we've selected have barely seen the light of day beyond their incredibly dedicated and perhaps obsessive following. Only five copies of Leon Genonceaux's 1891 novel The Tutu existed until the 1990s because Genonceaux was already in trouble with French police for immoral publishing when he wrote it and feared a life in prison if he distributed the book to the public. Similarly, The Red Book by Carl Jung was reserved for Jung's heirs for decades before it was made available to a wider audience.

Some of the books on our list are more widely known (though not necessarily widely understood). Robert M. Pirsig introduced the Metaphysics of Quality, his own theory of reality, in his philosophical novel Zen and the Art of Motorcycle Maintenance. The book was rejected by over 100 publishers before it was finally published by William Morrow & Company in 1974 and today it's regarded as one the most influential texts in American culture.

From funny fiction and serious science fiction to knitting manuals and alternative art, the books on this list have steered the course of an individual's life, created a wave of change in a society, culture, or generation, and garnered fanatic attention from a few or few million readers for their quirky and obscure content.

As it happens I once wrote a review about the Voynich manuscript for The Los Angeles Times.
Posted by MICHAEL HAAG at 00:07 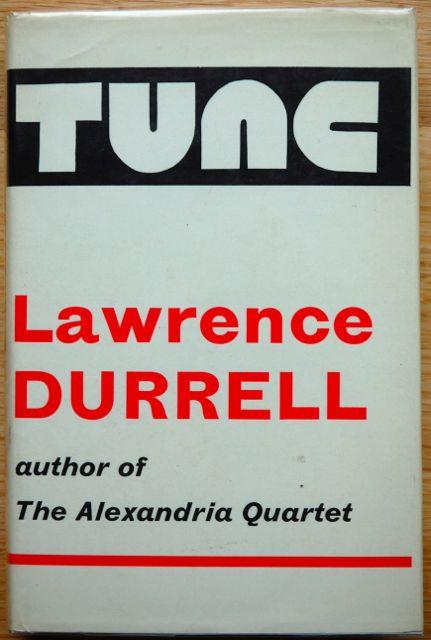 Lawrence Durrell was not Indian nor was he Irish but was he a Sci-Fi writer?  This entry in the Encyclopaedia of Science Fiction says that Tunc and Nunquam and also The Avignon Quintet put him in that category.

Lawrence Durrell (1912-1990) Indian poet and author (his English/Irish family settled in India about 1850), in England from 1923 to 1935, then in Greece and elsewhere; best known for the Alexandria Quartet (1957-1960). His fourth novel, Cefalû (1947; vt The Dark Labyrinth 1961) is a Near Future tale set Underground in a Cretan Labyrinth, where emanations out of the Minoan Time Abyss afflict the protagonists. His sf novel sequence, Tunc (1968) and Nunquam (1970), assembled as The Revolt of Aphrodite (omni 1974) – the original title is from Petronius Arbiter: "aut tunc, aut nunquam" ("either then or never") – subjects sf material to intensely literary scrutiny. In the first volume, Merlin, a burgeoning multinational corporation, co-opts the protagonist, Felix Charlock, into constructing a super-Computer, which can predict the future and which drives him to madness; in the second volume, Felix is cured in order to create an Android lady – echoing a Durrell obsession – perfectly duplicating a destroyed lover of the boss of Merlin; but the android is also destroyed in a Near-Future world choked with evil and images of corruption. The late Avignon Quincunx [for titles see Checklist] is an immensely complex Gnostic fantasy which exfoliates – in a series of Hermetic and numerological figurations – out of a central quincunx comprised of place, Time, Metaphysics, reincarnated figures, mirrors. 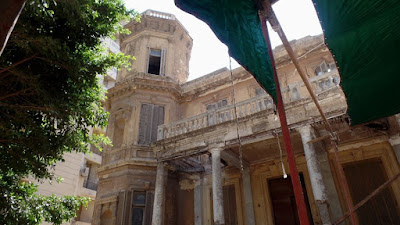 Lawrence Durrell lived in the Villa Ambron in Alexandria during the Second World War.  He worked in the tower at the top of the villa where he wrote Prospero's Cell about Corfu and drafted the first pages of what would become Justine, the first volume of the Alexandria Quartet. 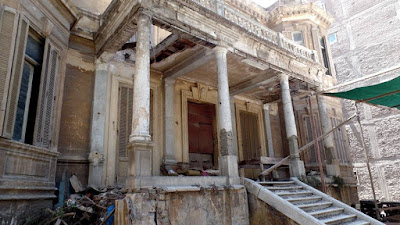 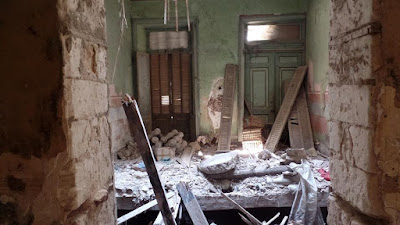 The Villa Ambron continues to be deliberately neglected and battered and destroyed by a developer who has already planted blocks of flats in its once vast garden. Two laws protect old villas from development so the tactic is to encourage them to fall down. 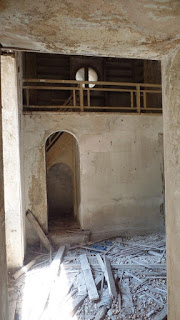 Bent Christophersen, an antiquarian book dealer familiar with Egypt and Greece, visited the villa two weeks ago and took these haunting photographs - I thank him for kindly allowing me to use them here; they remain his copyright.

Bent entered the house on the ground floor and worked his way across the wreckage towards the base of the tower.

A staircase rises up from the cellar of the villa to the upper floor. But to reach Durrell's writing room at the top of he tower required climbing an outside staircase, now gone. 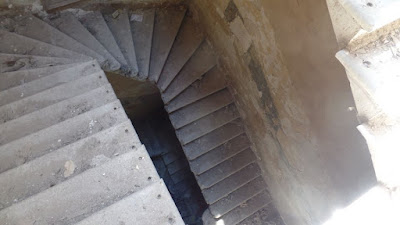 Bent was able to get as far as the octagonal room immediately below Durrell's writing room.

Read more and see more photographs about Lawrence Durrell and other denizens of the Villa Ambron, including Eve Durrell, the model for Justine.
Posted by MICHAEL HAAG at 20:27

I discovered the other day that a restaurant previously called Aladino's has changed its name to Alexandrie.

The restaurant explains its transformation: 'Unique in London, Alexandrie's stylish restaurant in Kensington offers its brand of fine Alexandrian cuisine, conveying the marriage of flavours by the most cosmopolitan city from antiquity to recent times'.

Cosmopolitan as recently as 1953 when you might see Sophia Loren hanging out a window overlooking the Corniche. That was the year she was in Egypt filming Aida in which she played the title role.

As long as the restaurant remains as out of date as this photograph it should do well.
Posted by MICHAEL HAAG at 01:58

The Man who Mistook his Holiday for a Hat

I received this postcard yesterday. It dates from the 1920s when it was de rigueur to wear a hat while viewing the Underwater Gardens at Catalina off the coast of California.  Those were the days, you might think. 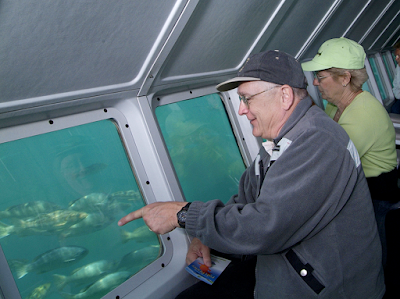 
Today, sixty years after the publication of Lawrence Durrell's Justine, Faber and Faber have published a paperback edition in a cover that is a reminder of the first edition - a child's handprint, so familiar on the walls of Egypt, to avert the Evil Eye.

There is a brief and reassuring foreword by Victoria Hislop, who describes herself on her website as the 'multimillion-copy bestselling author' of popular novels set in the Mediterranean. Justine has a modernist flavour, she writes, and must have tested readers when it was first published in 1957, but 'You do not stop to ask "why?" or "when?" but instead follow the compelling narrative flow'.

Your reward is Durrell's remarkable writing, his portrait of a vanished exotic city 'described with a vividness and clarity that invades the reader's every sense', and most of all his 'honest exploration of love'. 'Here, more than in any other novel I know, we see this powerful force at its most complex, at its most unkind and its most real. It is the great strength of this exceptional work.'
Posted by MICHAEL HAAG at 19:57