Hallowe'en Here and There

In and Out of the Roman Empire


I took the opportunity of my visit to Hexham in Northumberland for the Book Festival there in April to go see the northernmost frontier of the Roman Empire. I have been along the Rhine, the Danube and the Euphrates and I have travelled up the Nile to Aswan and beyond, but I had never been to the Roman frontier along the River Tyne.


A few miles north of Hexham are the partly excavated remains of the Roman cavalry fort at Chesters, one of a series of garrisons along Hadrian's Wall which marches east to west across England just north of the Tyne - and which here at Chesters actually crosses the river. The Wall was a retreat of sorts, or a consolidation; the Romans had pushed far further north than that.

It began when Julius Caesar invaded Britain in 55 BC and again in 54 BC during the Gallic Wars; his purpose was to punish those British tribes which were giving support and refuge to the tribes resisting the Romans in Gaul. Ninety years later, in AD 43, during the reign of the emperor Claudius the Romans invaded Britain again, this time to stay and enjoy the agricultural and pastoral wealth of the land.

Demonstration of Rome's long term intentions was given by Agricola, the governor of Britain from 77 to 85, who subdued the whole of what is now England and Wales and established numerous forts as deep into Scotland as Aberdeen and Inverness and even sailed to Orkney and took its surrender, a voyage which incidentally definitively established that Britain was an island.  But the cost in manpower was considerable; altogether the Empire was manned by thirty legions, four of these in Britain alone, whereas the powerful Persian Empire was opposed by just six legions and wealthy and populous Egypt was controlled by only two. 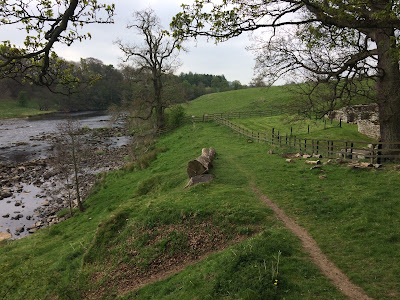 And now, as Tacitus wrote in his history, 'the conquest of Britain was completed and then let slip' when the emperor Domitian withdrew one legion, a short term saving with huge long term costs.

Disturbances in the provinces were more than three legions could handle and when the emperor Hadrian visited Britain in 122 he ordered the construction of a wall across the narrow Tyne-Solway isthmus, abandoning everything to the north to the barbarians.  Hadrian's Wall, completed in just four years, was a remarkable achievement, an immense stone barrier requiring the moving of some two millions tons of rock and soil, lined by castles at every mile along its 80-mile length with turrets in between and large fortresses at intervals, and garrisoned by over ten thousand men in all.

The wall marked the northern boundary of the Roman Empire until the legions withdrew from Britain three centuries later.  In that sense it was a success but the cost of manning the wall was a drain on Rome's resources; in 410, the same year that the Romans abandoned the island, Rome itself was sacked by the Visigoths. The Roman Empire in the West collapsed completely in 476.

Now you walk across a field north of Hexham and through the ruins of a gate in the wall of the cavalry fort at Chesters and you are entering the Roman Empire, and returning to the ticket office and the attached café for a cup of tea you leave. In and out of the Roman Empire was never so easy.
Posted by MICHAEL HAAG at 17:43 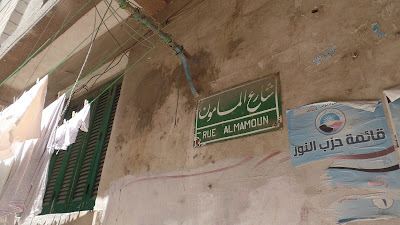 Bent Christophersen was the last person to photograph inside the Villa Ambron in Alexandria before it was destroyed last month. I have posted some of Bent's photographs earlier; now he has kindly provided more (the copyright is his). Here is one of the corridor leading to the base of the tower, several of the stairway leading up, and the Rue Mamoun street sign which is all that remains of the past. 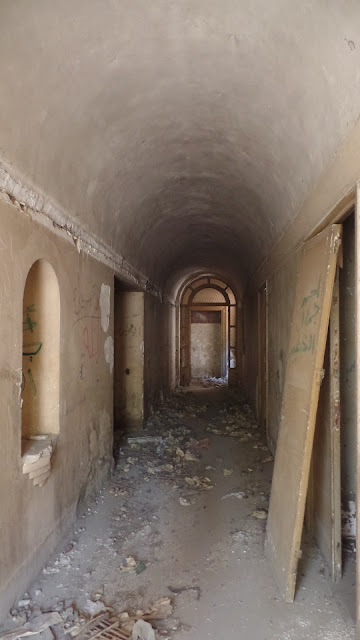 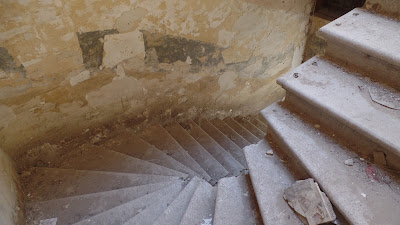 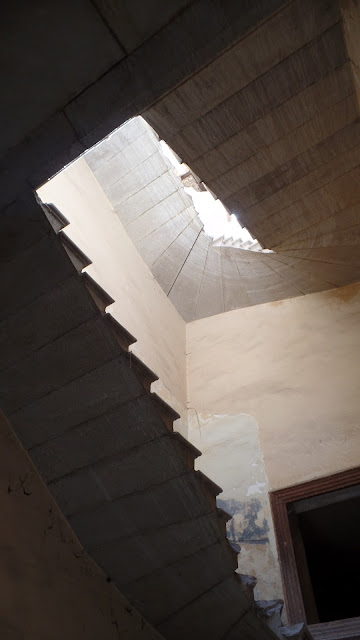 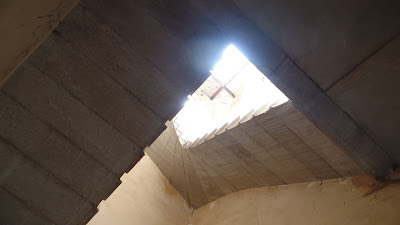 
Lawrence Durrell, who was born in India, attended the Jesuit-run St Joseph's School at North Point in Darjeeling for two years, 1921-22, before coming to England to continue his education.

But it seems St Joseph's knows nothing about this and has instead honoured Gerald Durrell as the 'well known author' among its North Point alumni.  Gerry, however, left India in 1928 when he was three; he never went to St Joseph's.  It is nice to know that Jesuits sometimes get things wrong.

Margo Durrell was at Malvern Girls' College (now Malvern St James Girls' School) from spring term 1929 to summer term 1935 when she blew it all and went to Corfu.

She was always in two minds about whether it had been right to leave Malvern Girls’ College. ‘Corfu was an escape, in a way,’ she recalled. ‘I was doing very well at Malvern. I could have had a career, you see, which I sometimes wish I had done.’

She might have been an actress or a ballet principal as the school magazine for summer 1930 shows, when Margo appeared in the school ballet Joy Incarnate in the role of a snowdrop.

Malvern lost a snowdrop but gained an illustrious Old Girl.