Last of the Cairo Poets

John Cromer Braun, the last of the Cairo Poets, died yesterday at the age of ninety-seven.  As a lawyer he was known as John Braun; as a poet he was John Cromer, and it was in this guise, while serving with British Security Intelligence in Egypt during the Second World War that he co-founded the Salamander group which collected and published poems by men serving in the armed forces, publishing them in their Salamander literary magazine and their series of Oasis anthologies.

Here is one of John's poems published by the Salamander group at the time.  It is called Asleep in War.


I called you once, but you were sleeping,
Gold in your hair the moonlight gleamed.
I stood quite still, but my heart was leaping
Though I knew not what were the dreams you dreamed.

I called you again, you still were sleeping,
Pale was your face, no smile was there.
Your eyes were tired with too much weeping,
The splendid lustre had left your hair.

I called once more, you were not sleeping,
A trickle of blood lay by your head.
The sky was clear, no searchlights sweeping;
Raiders had passed - but you were dead. 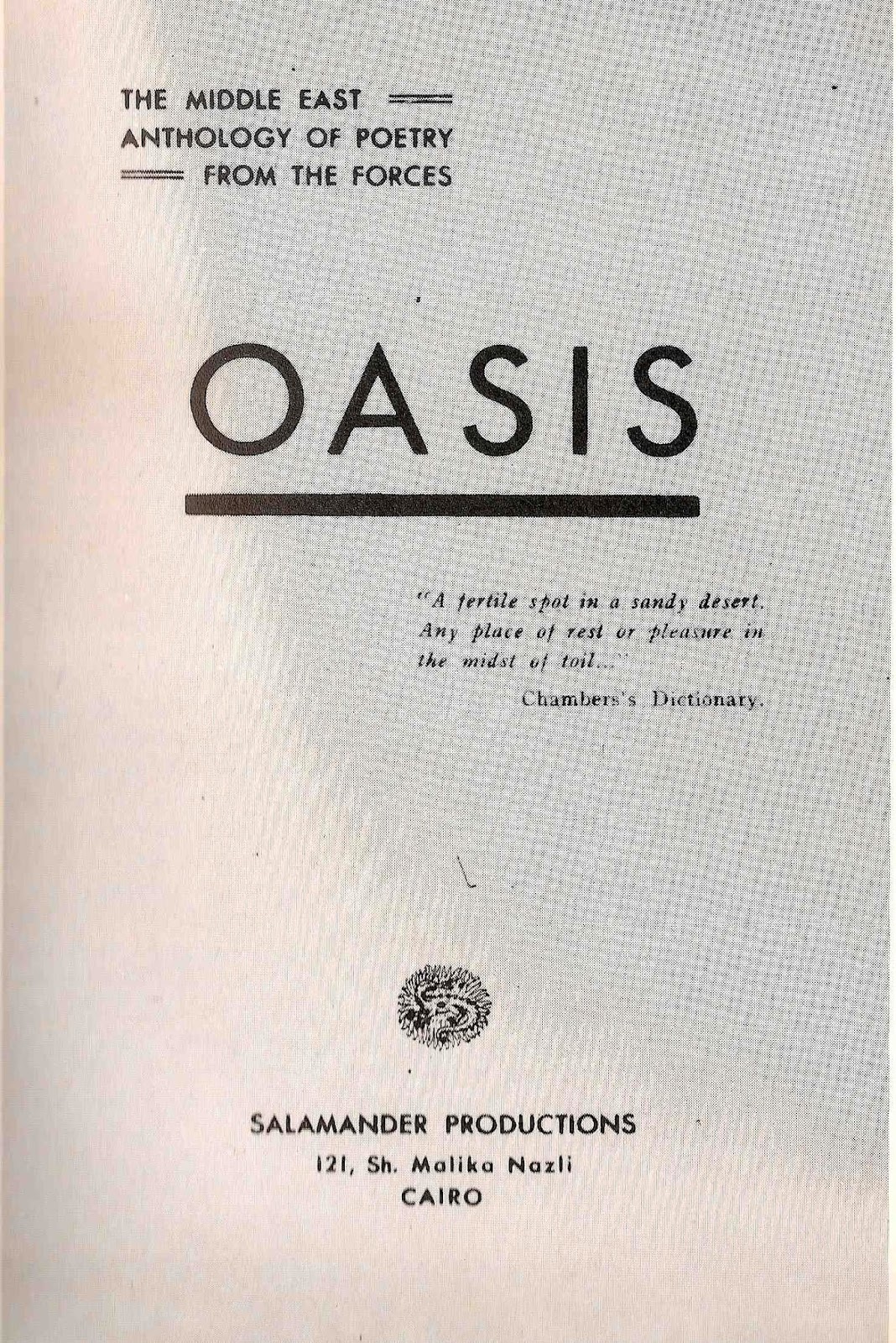 In Cairo John became lifelong friends with Mursi Saad el Din with whom he later wrote Under Egypt's Spell: The Influence of Egypt on Writers in English from the 18th Century.  Mursi died last year; in this article in Egypt's Al Ahram newspaper he tells about the Cairo Poets.

As Mursi explains, Salamander was one of two groups of poets in Cairo at the time, the other formed mostly of civilians and known for their literary journal Personal Landscape, its founders Lawrence Durrell, Robin Fedden and Bernard Spencer.

When Durrell arrived in Egypt, having just escaped from Greece in 1941 with the Germans on his heels, it was John Cromer Braun in his role as Field Security officer who gave him clearance.  I interviewed John about that event for my book Alexandria: City of Memory, from which I reproduce this passage.

In the darkness before dawn on 1 May 1941 an Australian transport making the perilous crossing from Crete arrived at the boom of the Western Harbour, the ancient Eunostos of 'safe return'. The boatload of refugees had been expected for some time, and John Cromer Braun along with two other field security sergeants assigned to meet it had spent several days in idleness, eating ice cream and drinking coffee at Pastroudis on the Rue Fuad and regaling themselves on beccafico, the little birds that are a Levantine speciality, washing them down with quantities of Mareotic wine. Now suddenly at four in the morning they were awakened in their barracks at Mustafa Pasha and told to bustle down to the docks where the near moonless night screamed with a barrage of tracer fire.

As the dawn call to prayer unwound from the dissolving darkness and the last enemy planes fled west with the night, the boom was opened and the waiting transport entered the harbour, passing along rows of camouflaged warships to its berth. Disembarkation began at mid-morning, Braun checking identity papers as the passengers filed off, 'for the most part a pathetic line of retired schoolteachers, professors, widows and other expatriates from Athens and the Peloponnese'. Amid the collapse and confusion of resistance in Greece, refugees fled southwards across the Mediterranean to Egypt where as a precaution against infiltration by Axis agents they were carefully screened. Braun was standing at the head of the gangway when 'a stocky, round-faced figure' came forward, his wife just behind and his infant daughter on his shoulders. He took his passport and read 'Lawrence Durrell'.'

'Once of the Villa Seurat?'

'Yes, anything wrong with that?'

This did not seem the best moment for Durrell's notoriety to proceed him: until the outbreak of war he had been living on Corfu, where in 1937 on his twenty-fifth birthday he completed The Black Book, his savage portrayal of a swaddled spiritual and sexual culture that he called the 'English death'. T S Eliot, a director of Faber and Faber, greeted the novel as 'the first piece of work by a new English writer to give me any hope for the future of prose fiction' but for fear of an obscenity prosecution would not publish it without cuts. Durrell refused, and instead an unexpurgated edition was published in Paris with the help of Henry Miller, whose own Tropic of Cancer, banned in Britain and America, was enjoying a succès de scandale.


'No, not at all', replied Braun, whose poetry had been published in London before the war and who was also a keen admirer of Miller, 'I would just like to talk to you about it.' After passing through Egyptian immigration, Durrell, Nancy and their ten-month-old daughter Penelope were placed in separate transit camps for men and women, Durrell at Agami, west of the city, where Braun went to join him that evening. 'We spent the whole night in a slit trench watching the air barrage while we talked about Paris and Henry Miller and literature till the next day when they were reunited - my recollection is that they were put on a lorry, the three of them, and sent to the Luna Park Hotel in Cairo'.


I had the benefit of talking with John many times, not only for my Alexandria book but also gathering information for the biography I am writing about Lawrence Durrell.  The London International Surrealist Exhibition of 1936 features in the early correspondence between Durrell, then in Corfu, and Henry Miller in Paris.  I wondered if John knew anything about it.  To my astonishment he produced the programme; he had made a special trip from Portsmouth up to London and gave me a first hand recollected tour.

Later I returned the favour in a way.  John told me that he had read Durrell's The Black Book in Cairo; it was the first edition, the only edition available then, published by the Obelisk Press in Paris in 1938, but it had been stolen from him, he was fairly sure, by his fellow poet John Waller.  A few years later I was visiting a collector of Durrell's first editions who showed me his copy of The Black Book, a first edition.  Where had he got it?  It had been sold to him by John Waller.  'I know whom he stole it from!', I said.  Then after explaining to John that the collector had acquired the book in good faith and making him promise that he would not ask for it back, I put him in touch with the collector - solving the mystery and closing the circle after sixty-odd years.  John even did the collector the favour of adding a letter of provenance. 'This book was stolen from me by ...'