To Alexandria with Eve Durrell

I met Eve Durrell in 1991, and we remained friends until her death in December 2004. We both lived in London, but I had been to Alexandria many times; it was a city I knew well, and I had glimpsed something of how it used to be. Now I was writing a book about the city, about the Alexandria of Constantine Cavafy, E M Forster and Lawrence Durrell, but also about the Alexandria that existed independently of literary creations, the vanished city of forgotten lives. I talked with many people about the city, I read diaries and letters, and I looked through photographs; I pieced together a history, something like my own memory of Alexandria. And when Eve would come for dinner, which was often, or for lunch or tea, we would talk of Alexandria, of an Alexandria we shared. Then one day she asked if I would take her back, and in January 1999 we visited Alexandria together.

Eve was eighty then, a woman of great enthusiasms, remarkable stamina and tremendous energy. Throughout our stay in the city, Eve loved running in and out of shops, bargaining in Arabic, exchanging simple courtesies, enjoying what she called the easy gracefulness of the town. ‘Yes, everything has deteriorated’, she admitted, but she was stimulated by her memories. ‘I am on a high.’ We had arrived towards the end of the Muslim month of fasting; as darkness fell the Ramadan gun went off and was followed by the call to prayer. That evening when we dined at the Trianon, Eve became quietly reflective for a while and then smiled, saying ‘I was thinking of all the lovers I have had. All so very different. I have thought of writing a book about them, but there is no time’. As we stepped out into the night the streets were strung with Ramadan lights and lanterns and filled with happy people. Eve was thrilled. She was like a fish in water here in Alexandria, immersed in her youthful past.

Over the years in London Eve had told me a great deal about her life, especially about her youth in Alexandria and her relationship with Lawrence Durrell. But now arriving in the city was like walking onto a stage; the old familiar set was still there, and as we went from place to place Eve would tell me the stories again, this time showing me exactly how and where. Eve was dramatic, always stylishly dressed, and she remained a very attractive woman to the end; at the age of twenty-five she was stunning. She first met Durrell at Baudrot, a fashionable drinking hole on the Rue Fuad; it was offices now, but the building was the same, and it was there, she pointed, over there on the left, that Durrell was holding forth at the centre of a crowd of people. ‘Larry was attracting people like honey, like bees to a honeypot’. Curious and attracted, she pressed forward to see. Soon she was eagerly pressing herself against Durrell himself, almost body to body. 'He was frightened, terrified. I'd never frightened anybody in my life before. He was terrified. And he admitted it; it wasn't just my imagination; we discussed it afterwards. Probably he never had someone like me approaching him in that direct way'. It was a way she had with people, too many people, Durrell thought, and it left him uncertain about where he stood: ‘My pessimism guards me against your smiles to other people and your bloody gipsy familiarity with tout le monde’, he told her later. But her behaviour also thrilled him. ‘Gypsy Cohen’, he wrote to Henry Miller, ‘provides a cyclone every day with a real generous and mad beauty which is touching and exciting'.

Anyone who has known Eve has experienced that excitement, that urgency about her. But there was a vulnerability, a fragility too. There would come the moment when Eve cut off all contact and withdrew, sometimes silently, sometimes accompanied by the most terrible wailings as she plunged into the blackness of despair.

We went to Pastroudis, where Eve and Durrell had their first rendezvous and had talked late into the night. And to Moharrem Bey where they lived together at the Villa Ambron. She talked about those times and the years that followed; she could be critical of Durrell, ‘but I still love Larry’.

But the memories that most moved Eve were not those of her time with Durrell or any other lovers; instead it was the memories of her childhood days. Eve was three when her mother’s twin sister committed suicide; from then on ‘my mother wasn’t functioning’, and Eve depended on her maternal grandmother for attention and affection, but she in turn died when Eve was six. From then on, Eve saw herself at the mercy of an unstable mother and a possessive father infatuated with his own daughter. When we went round to what had been her parents’ flat off Rue Champollion, the first thing Eve did was to point to the balcony one floor up: ‘That’s where my mother tried to jump from to commit suicide’.

One morning we walked along the Rue Amin Fikri Pasha from the Ramleh tram terminus towards the Rue Sultan Hussein, looking for her school, the Scottish School for Girls. The school was behind a high wall that ran along the pavement; we only glimpsed it as we came up to the gate. At that moment Eve was overcome with emotion; her knees gave way and I steadied her in my arms. Eve had gone to other schools before, but this was the school she had gone to from the age of twelve; she had learnt English here and thanks to the loving attention of a teacher, Miss Melanie, this was where she gradually came out of the shell she had inhabited since early childhood.

The great event in Eve’s life, the single most important one, it seems from everything she said, was the day she fled from her parents’ flat. It was the break with the pain and oppressiveness of her life with them. This was soon after her long evening of talking with Durrell at Pastroudis, and he seemed her only hope; she came round to the British Information Office and gave herself to him.


As we went from place to place in Alexandria, each place a different moment in her life, Eve would awaken to new memories and emotions, new images of herself: ‘At each place there is me’, she said. ‘I see me and me and me, all the several mes’.

I gathered her together and put her in my book, and I know that she was happy about that. But there are times when I have wondered if those several Eves were disconnected fragments, not sequences in her life; fragments from a broken childhood held together by her impulsiveness, her energy, her cyclone personality. What I do know is that Eve was headstrong, exasperating, generous and loveable. And sitting by her hospital bed, holding her hand in mine, I realised that she was also very brave. On her last day she put some lipstick on, she summoned glasses and brandy, and she raised a toast to life. I have been fortunate to share London and Alexandria with Eve, and she lives with me still in my memories. 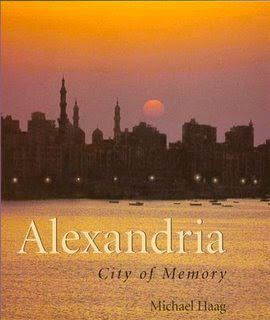 The story of Eve (née Cohen) Durrell and Lawrence Durrell, and of the Alexandria they knew, is told in Michael Haag's book Alexandria: City of Memory, published by Yale University Press in London and New Haven, and by The American University in Cairo Press in Cairo.
Posted by MICHAEL HAAG at 00:54