What the Durrells Did Next 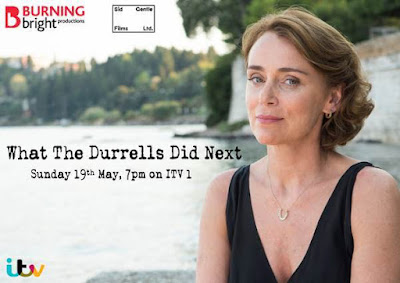 You can also find out what the Durrells did next by reading this book.
Posted by MICHAEL HAAG at 22:03

End of the Durrells' Corfu Idyll


The Mirror has run a story on the terrible end of the Durrells' Corfu idyll when the island was devastated by war and some of the family fled for their lives.
Posted by MICHAEL HAAG at 00:00

The Durrells went to Corfu in 1935, where they seemed able to ignore the darkening political situation in Europe. But judging from this photograph there was already a fascist movement in Corfu two years before the Durrell family arrived.

What I do not know is to what extent this was an indigenous Greek movement or a purely Italian-Corfiot one.  Corfu was long ruled by Venice and Italian influence remained strong.  Italian was the lingua franca of Corfu well into the nineteenth century and the island had an Italian community right up to the Second World War.  Mussolini used this historical connection to twice justify his occupation of Corfu, once briefly in 1923, again in 1941.

Certainly Corfiots courageously protested against the second occupation, a rare thing in Europe at the time, and the island provided the beginnings of the Greek resistance against the 1941-1945 Italian and German occupations of Greece.
Posted by MICHAEL HAAG at 20:32