Postcard of a Man with a Bow Tie

I recently received this postcard of a man wearing a bow tie.  Thank you.  You know who you are.
Posted by MICHAEL HAAG at 20:22

Not in the Footsteps of Patrick Leigh Fermor

Over the years I have spent quite a bit of time in the Mani, that central finger of the southern Peloponnese.  Down its spine runs the Taygetus range, its highest peak Profitis Ilias, which though rising to only 2404 metres is the highest mountain in the Peloponnese and the third highest, after Olympus and Parnassus, in Greece. On the eastern side of the range is Sparta and the Laconian Plain; on the western side, in what is known as Outer Mani, is the small town of Kardamyli and numerous villages along the coast or on the mountain slopes behind them.

From many places along the coast and in the foothills of Outer Mani I would catch sight of Profitis Ilias, which always fascinated me because its peak looked snow-covered even in summer, or shielded in electrum as the ancient Egyptians used to do with the Pyramids.

That fascination led to a desire - and it was a desire, something like a lust and a need - to traverse the Taygetus range from east to west, from Sparta down into Outer Mani.

I had read Patrick Leigh Fermor's Mani and had followed most of his adventures, to the towerhouse villages of Kitta and Vathia, for example, and Old Kardamyli, and also out onto the Tigani peninsula with its ruins of a Villehardouin castle and the bones of Latin knights visible in the opened crypts.

But Leigh Fermor's description of his traverse of the Taygetus range offered little clue to his route.  All he says is that with the help of a guide he followed a gorge down into Kampos well north of Kardamyli.  Otherwise he is strangely unhelpful and vague.

Recently I have been told that he would have gone from Anavryti west of Sparta up to the watershed at Portes, then through the Rintomos Gorge and so out to Kampos.

Be that as it may,  but Paddy's book left me in the dark at the time, and after poring over maps looking for his possible route I eventually gave up and decided that the only thing to do was to keep it simple and direct.  I would climb Profitis Ilias from the Sparta side and then come down into Outer Mani along the Viros Gorge which spills into Kardamyli and the Messenian Gulf.

That winter back in London I talked about my idea with my friend Neville Lewis and he agreed to join me in the traverse.  Meanwhile I bought a pair of stout boots and did some walking across the south of England and also in the Greek islands in preparation.  At the end of August 1982 we met up in Athens and drove down to Outer Mali via Sparta and the Langada Pass through the mountains to Kalamata and so down to Kardamyli and beyond.

Having shown Neville the eastern approach and the western flank of Taygetus and had a good look at the peak of Profitis Ilias and the Viros Gorge, he announced himself game and we set off, friends driving us back to the Sparta side.  If they did not see us again soon, they were to do something, though none of us knew what.

Climbing Profitis Ilias from the Sparta side is easy enough.  The Spartans used to do it all the time and worshipped at the top.  Even the Orthodox Church has constructed a ramshackle chapel up there with a tin roof for the occasional ceremony.

Getting down is another matter.  I discovered that what had appeared as a snow peak in summer, or a cap of electrum, was actually scree, that is loose stone which covers a considerable amount of the upper part of the mountain.

We soon received a warning of what could happen if things went wrong. We began by walking south along a ridge but it came to a sudden end with no way down.  Here we found a piece of paper held down by four stones, saying Nikophoros K------ (I forget the last name) eton 38, also two cardboard boxes held in place by stones inside, a scarlet robe also held down by stones, and a reed cross lying among the stones.  Neville immediately went looking for the grave itself and found it beneath a rocky ledge, a body-length pile of stones.

We retreated back along the ridge and found a more promising line of descent.  But the scree, being loose underfoot, made it difficult to descend without slipping, which I did, destroying my water bottle at the same time.  Even a bottle each was too little, it soon became apparent.  This was early September and there was no water anywhere.  And we now had one bottle of water between us for a descent that I hoped could be accomplished in a day but maybe not.
Just follow the gorge, it was as simple as that, I thought.  But the gorge was a torrent in the late winter and was filled with gigantic boulders.  Sometimes you could walk round them but more often than not you had to climb over them.
By late afternoon we had no more water. 'Desolation!' Neville exclaimed as every bend we turned revealed several more ahead, and 'Dio pagomenes bires amesos', calling out for two ice cold beers immediately. Fortunately as it got dark a full moon rose to illuminate our way.  Just keep going along the damn gorge; it will take us eventually into Kardamyli, I told myself.  Then Neville spotted a path rising off to the left, a rocky defile rising out of the gorge and up past streams of water pouring from the rock face where we drank ourselves silly before continuing into the village of Exochori.

At Exochori there is a pantopoleion which doubles as an ouzeri and general drinking hole.  We went in for a beer.  Next to us two men were sitting.

They asked us where we had come from.  From Sparta, we said, over the top of Profitis Ilias and down through the gorge.  They said nobody has ever done that before.  We told them about Nikophoros.  Ah, they nodded and told us that he had climbed the mountain from the other side and died up there two months previously; he was a lunatic, they said.

The Feast of Mary Magdalene and the Oldest Story Around


Q: What surprised you most along the way of researching Mary Magdalene and writing this book?

A: I suppose what surprised me most was how important the story has been in the course of 2,000 years, its inventions and reinventions, and how much it still matters to us today. That suggests to me Mary Magdalene has a significance, a power, greater than the Gospels tell, greater than the Church. It is the old story of death and love and rebirth. Take that carnally, take it spiritually, take them together as one, but it is the oldest story around.

22 July is the Feast of Mary Magdalene.  The Religion News Service has interviewed me for an article about my book The Quest for Mary Magdalene that will be distributed to newspapers, magazines and broadcasters round the world.
Posted by MICHAEL HAAG at 20:57

Gulf News reports an exhibition at the Sharjah Art Museum in the United Arab Emirates which is unusual, possibly unique, in one respect.  It includes among its works paintings by Clea Badaro, the Alexandrian artist who served as a model for the character of Clea in Lawrence Durrell's Alexandria Quartet.

Until now, as far as I am aware, Clea Badaro has been deliberately ignored in the Middle East.  The Museum of Modern Egyptian Art in Cairo does not have a single one of her paintings.  She was born in Cairo to a Lebanese father and Greek mother and lived out her adult life in Alexandria - but on the rising wave of populist Arabism and Islamism, that cosmopolitan world has been ignored and even denied by Egyptians and Clea Badaro has ceased to exist.

But this new exhibition changes that.  The Gulf News writes:


The visual narrative continues with a selection of portraits and landscapes from different decades and different parts of the Arab world that indicate how quickly the artists moved to a more accurate depiction of their own culture and surroundings. The eclectic collection includes works that are significant in the personal journeys of the artists or in the art history of this region, such as an early portrait by Syrian artist Marwan Kassab Bachi, painted soon after he moved to Germany, and depictions of the changing urban and rural landscapes by masters such as George Sabbagh, Saliba Douaihy, Yousef Kamel and European Egyptian artist Clea Badaro.

Souvenirs of the Lawrence Durrell Conference at Rethymnon

The most recent Lawrence Durrell conference was held at the Rethymnon campus of the University of Crete in the hills above the town, whereas the participants accommodated themselves down below, some in the new quarters of Rethymnon along the beachfront, others like myself in the old Venetian town which has been somewhat overlayed by Ottoman features.

The conference was organised by Anna Lillios, professor of English at the University of Central Florida.  She herself comes from Crete.

Among the people I met up with again at Rethymnon was Ian MacNiven, who edited The Durrell-Miller Letters which I co-published with Faber and Faber in 1988.


A thoughtful friend has drawn my attention to the Second Coming of Noah's Ark.  Possibly the last chance to get on board. 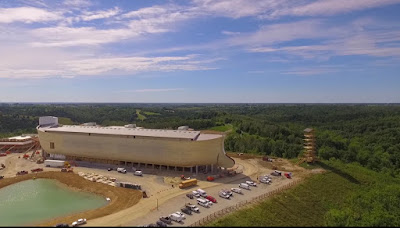 The Ark is a faithful reconstruction of Noah's original as detailed in the Bible, Genesis 6-9. 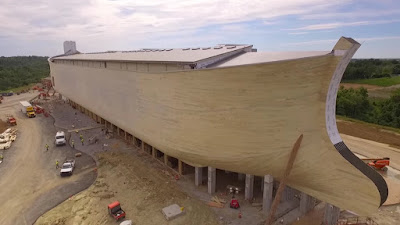 Unlike the Ark of Genesis which came aground on Mount Ararat in Eastern Turkey - slap in the middle of all that Middle Eastern danger and turmoil so distressing to tourists and the faithful - this Ark is conveniently located in Kentucky.  And to save yourself from the wrath of God all you need is $40.  Pets are welcome.

The Ark launches tomorrow, 7 July, just in time for the American presidential election campaign.  Sailing is scheduled for the first heavy rain.  No cabins for singles, however.  You must come two by two, male and female or whatever; facilities can accommodate same sex, no sex and transgender needs, though priority is given to those who go forth and multiply.

For more information about the End of the World and how to avoid going under, click here.