An article in today’s Telegraph speaks of a campaign to save the house where Lawrence Durrell, the author of The Alexandria Quartet, lived during his time in the city in the Second World War. (To read the article, click here.)

Durrell and his Alexandrian girlfriend Eve Cohen - who would later become his wife and who also inspired the character of Justine - moved into the upper floor of the house - the Villa Ambron - with a number of friends in October 1943.  Down below lived the owners, Aldo Ambron and his wife Amelia, and their daughter Gilda.

In an earlier post I said something of my visit to Alexandria with Eve Durrell in 1999. We also went round to the Villa Ambron which was already in the hands of the developer.

The developer had bought the property in the mid 1990s with plans to build several blocks of flats in place of the villa and the artists' studio in the garden.

There are laws protecting old villas in Alexandria, but in Egypt the law is there to be abused and old villas are there to be knocked down. And so it would have been with the Villa Ambron except that unfortunately for the developer a famous writer had once lived there. Nevertheless damage has been systematically if furtively inflicted on the villa and the studio in an attempt to make them fall down.

In another tactic, as reported in the Egyptian press, the developer demanded the demolition of the villa because it had been inhabited by a kafir.  In Islam a kafir is an unbeliever, an infidel, a person who rejects God and denies the Islamic version of the truth. A kafir is the worst charge you can lay against a person; a kafir is beyond the pale and has no human rights; all his property is forfeit and his wife and his daughters too. The kafir of course was Lawrence Durrell.

Failing that ploy, the developer, Mr Abdulaziz Ahmed Abdulaziz, is happy to sell the property that he never had the right to develop for five million dollars to the British Council.

As Eve and I stood there looking at the villa which was being systematically destroyed, in a city without memory, she reminisced about how things used to be. 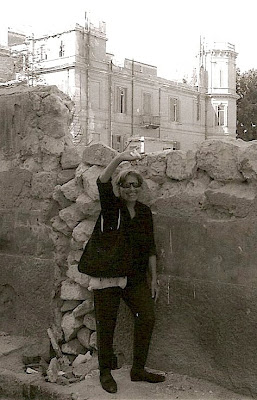 Eve and I walked round the block to look at the Villa Ambron from the rear, across what used to be a lush garden of frangipan and banyan trees and ever-flowering forests of violets and ginger lilies. D